Hyperscale cloud providers are experiencing some market saturation. Vendor revenue from IT infrastructure products (server, enterprise storage, and Ethernet switch) for cloud environments, including public and private cloud, declined in the third quarter of 2019 (3Q19) as the overall IT infrastructure market continues to experience weakening sales following strong growth in 2018.

The decline of 1.8 percent year-over-year was much softer than in 2Q19 as the overall spend on IT infrastructure for cloud environments reached $16.8 billion, according to the latest market study by International Data Corporation (IDC).

As a result, IDC chose to slightly increase its forecast for total spending on cloud IT infrastructure in 2019 to $65.4 billion. This represents a flat performance compared to 2018.

The decline in cloud IT infrastructure spending was driven by the public cloud segment, which was down 3.7 percent year over year, reaching $11.9 billion; sequentially from 2Q19, this represents a 24.4 percent increase.

It is expected to reach $44 billion in sales for the full year 2019, a decline of 3.3 percent from 2018. Despite softness, public cloud continues to account for most of the spending on cloud IT environments. 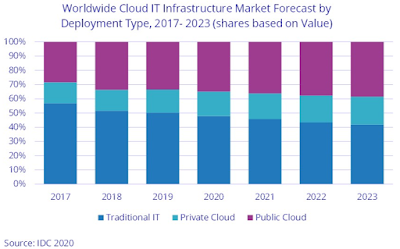 Until 3Q19, it happened only once, in 3Q18, and in 3Q19 it crossed the 50 percent mark for the second time since IDC started tracking IT infrastructure deployments. In 3Q19, cloud IT environments accounted for 53.4 percent of vendor revenues.

Across the three IT infrastructure domains, Ethernet switches is the only segment expected to deliver visible year-over-year growth in 2019, up 11.2 percent, while spending on compute platforms will decline 3.1 percent and spending on storage will grow just 0.8 percent. Compute will remain the largest category of cloud IT infrastructure spending at $34.1 billion.

According to the IDC assessment, while the industry overall is moving toward greater use of cloud, there are certain types of workloads and business practices, and sometimes end user inertia, which keep demand for traditional dedicated IT infrastructure afloat.

Geographically, the cloud IT Infrastructure segment had a mixed performance in 3Q19. Declines in the U.S. market, Western Europe, and Latin America were driven by overall market weakness; in these and some other regions 3Q19 softness in cloud IT infrastructure spending was also affected by comparisons to a strong 3Q18.

In Asia-Pacific (excluding Japan), the second-largest geography after the U.S. market, spending on cloud IT infrastructure increased 1.2 percent year-over-year, which is low for this region. However, it is in comparison with strong double-digit growth in 2018. Other growing regions in 3Q19 included Canada (4.9 percent), Central & Eastern Europe (4.6 percent), and Middle East & Africa (18.1 percent).