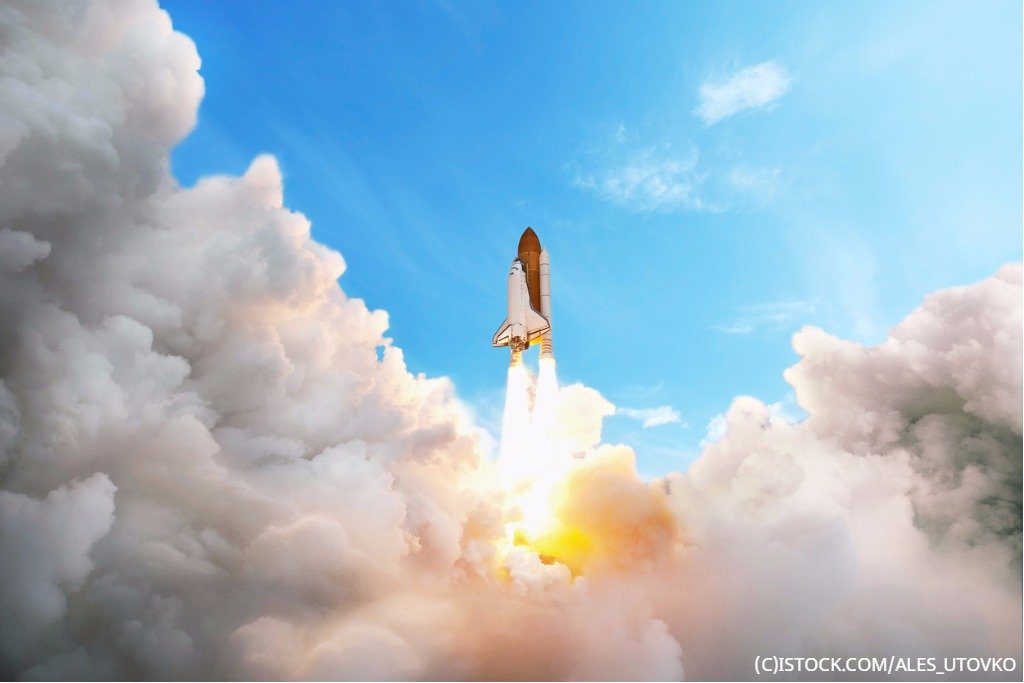 By James Bourne | 7th January 2020 | TechForge Media http://www.cloudcomputing-news.net/
Categories: Data & Analytics, Data Centres, Hybrid Cloud, Infrastructure, Infrastructure as a Service, Platform as a Service, Platforms, Research, Software as a Service,
James is editor in chief of TechForge Media, with a passion for how technologies influence business and several Mobile World Congress events under his belt. James has interviewed a variety of leading figures in his career, from former Mafia boss Michael Franzese, to Steve Wozniak, and Jean Michel Jarre. James can be found tweeting at @James_T_Bourne.

The dawn of a new decade represents a good opportunity for a more rounded assessment of cloud computing to take place – and according to industry analyst Synergy Research, the ‘remarkable transformation’ has seen the enterprise data centre hit hardest.

Synergy has kicked off 2020 with a couple of notes looking back at wider enterprise IT spending, as well as the impact of SaaS revenues. As the decade began (below) spending on cloud infrastructure services barely moved the needle; but as data centre hardware and software spend plateaued in the middle half of the decade – only seeing an increase in 2018 – last year’s projections revealed that cloud spending had finally overtaken on-prem.

Over the whole decade, Synergy noted, average annual spending growth for the data centre was 4% – and even the majority of this was due to the first three years of growth. For cloud services, the figure was 56% across the whole decade. 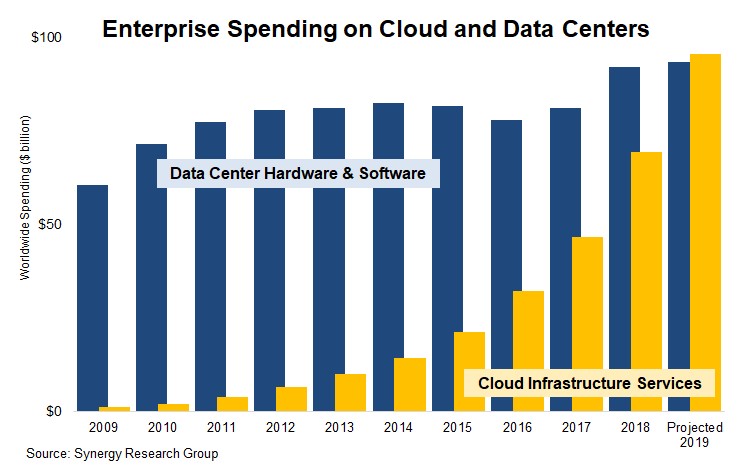 When it came to SaaS revenues, it has been a similar story: annual revenues are now north of $100 million at a growth rate of 39% per year. This compares with a growth in perpetual license software of just 4% per year. Microsoft, the ‘very clear software market leader’ throughout the decade as Synergy puts it, has seen its total software revenues double and SaaS revenue grow from zero to more than $20 million across the decade.

The usual suspects have seen significant growth in terms of organisations moving to SaaS-based models, from customer resource management (CRM) to human capital management (HCM). Yet enterprise resource planning (ERP) is one area which is still somewhat underrepresented, Synergy argues.

As John Dinsdale, a chief analyst at Synergy Research Group, puts it, the emergence of various huge SaaS platforms around enterprise collaboration, from Workday, to Zendesk, to Cloudera, forced the hand of traditional software vendors to push SaaS more strongly. 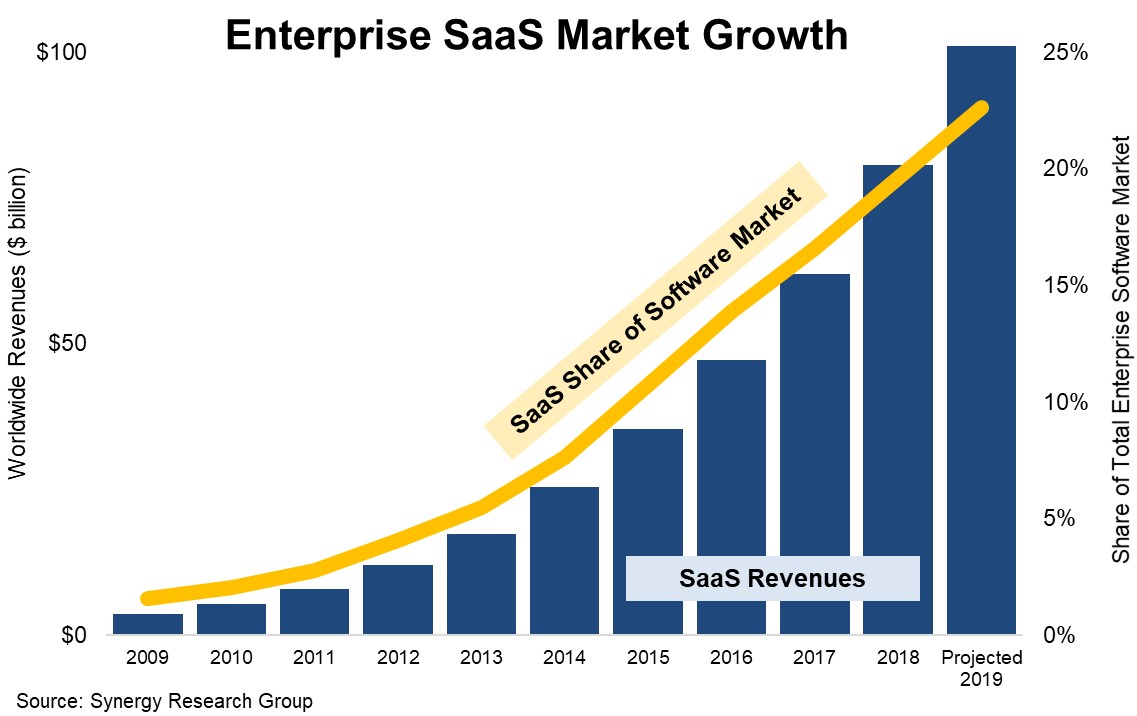 For those who have been involved in the industry over the past decade, the above is by no means new information. Yet it is certainly interesting – and more than a little fun – to look back and assess various growth points and predictions.

At the beginning of the decade SaaS, powered by the explosive growth of Salesforce, was clearly the poster child for cloud computing use cases. Looking at a Gartner market trends report from 2012 focusing on SaaS, as this publication reported at the time, many of their prognostications rang true. Gartner predicted that SaaS-based CRM would grow at three times the rate of on-premise applications, while noting that SaaS-based ERP would take a tougher route to cannibalisation. Each analyst report around the time put SaaS in the biggest bucket, followed by IaaS and then, much lower down, PaaS.

Infrastructure services naturally took a lot longer to earn trust among enterprises and other large organisations. Ovum’s 2013 Trends to Watch report around private and public clouds correctly identified Microsoft and Google as the key pretenders to Amazon Web Services’ (AWS) crown. Gartner’s 2013 Magic Quadrant for IaaS had two leaders; AWS and CSC. The latter merged with HP Enterprise Services in 2017, before Microsoft moved into the leaders’ zone in 2014 and the status quo remained for three years before Google joined the party.

The conversations around public versus private in the first half of the decade were legion. Indeed, exploring an emerging technology, assessing what can be done where and the security concerns are cyclical – take blockchain as a more recent example. Industries with particularly sensitive data concerns were naturally reluctant to move to different infrastructure. It was around the 2013 mark that the first real shoots of hybrid cloud were seen among organisations. A Rackspace study in August of that year found three in five enterprise respondents saw hybrid as the future, with the company affirming that hybrid was ‘enterprise ready’ for CIOs.

As the decade ticked over into its second half, the benefits of multi-cloud became more clearly defined. Assuaging vendor lock-in was one thing, but as the complexity of workloads increased, so did understanding. Some providers will be more efficient than others depending on your organisation’s data needs, be that around backup and disaster recovery, or analytics and insights. As Melissa Di Donato, CEO of SUSE, told this publication just earlier this week, her company’s strategy is to look upon this as a moveable feast.

Ultimately, the maturation and saturation in the cloud software and infrastructure markets in particular – platform may still have a little way to go, although Kubernetes has had an exceptionally strong 24 months – have seen the next wave of cloud services move in. It is all underpinned by data; K8s and containers are a part of that, but so are blockchain and artificial intelligence technologies. The quality and quantity of organisations citing machine learning capability as the primary reason to move mostly or all-in on a hyperscaler – Formula 1, Sainsbury’s and Walt Disney Studios just to name three recent examples – proves that companies are comfortable in the cloud, and want to see what’s next.

It can therefore be seen as a chicken and egg question: to what extent has the past decade been about natural technological advances, and how much has been through vendor strategy? Ultimately, and at risk of this being a cop-out, the answer is a bit of both.

Dinsdale cited ‘dramatic improvements’ in hosting and computational capabilities, leading to increasingly sophisticated enterprise applications and myriad ways of crunching, processing and analysing data both in terms of software and infrastructure. Yet much in the same way that studies show being in a plane is safer than being in a car, enterprises have understood this comparing cloud with on-prem. Breaches still happen, but as this publication has frequently reported, they are often self-inflicted. A lot of hard yards have gone into this from the vendor point of view – and expect this gap to gradually lessen over time.