How converged systems are enabling IT transformation initiatives

The certified reference systems and integrated infrastructure market generated $1.3 billion in revenue during the second quarter, which was a year-over-year decline of 13.9 percent and represented 38.1 percent of total converged systems revenue.

Revenue from hyperconverged systems sales grew 78.1 percent year-over-year during the second quarter of 2018, generating $1.5 billion worth of sales. This amounted to 41.2 percent of the total converged systems market. 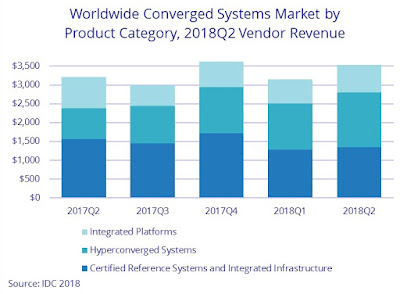 As it relates to the branded view of the hyperconverged systems market, Dell Inc. was the largest supplier with $418.7 million in revenue and a 28.8 percent share. Nutanix generated $275.3 million in branded revenue with the second largest share of 18.9 percent.

Cisco and HPE were statistically tied for the quarter, with $77.7 million and $72.0 million in revenue, or 5.3 percent and 4.9 percent in market share, respectively.

From the software ownership view of the market, systems running Nutanix's hyperconverged software represented $497.7 million in total second-quarter vendor revenue or 34.2 percent of the total market.

Systems running VMware's hyperconverged software represented $495.8 million in second quarter vendor revenue or 34.1 percent of the total market. Both amounts represent all software and hardware revenue, regardless of how it was ultimately branded.