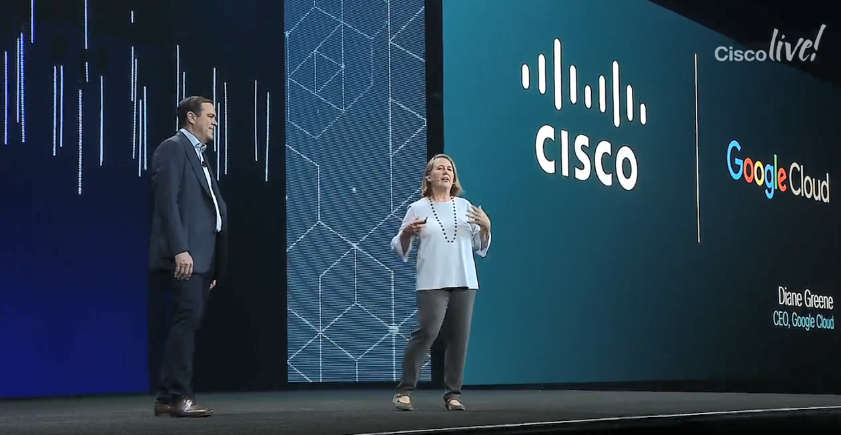 By James Bourne | 12th June 2018 | TechForge Media http://www.cloudcomputing-news.net/
Categories: Containers, Google Cloud, Infrastructure, Platforms,
James has a passion for how technologies influence business and several Mobile World Congress events under his belt. James has interviewed a variety of leading figures in his career, from former Mafia boss Michael Franzese, to Steve Wozniak, and Jean Michel Jarre. James can be found tweeting at @James_T_Bourne.

It’s a mad, mad, multi-cloud world all right. At Cisco Live US in Florida yesterday – the company’s flagship jamboree of all things networking – CEO Chuck Robbins was all but upstaged by Google Cloud chief Diane Greene.

Robbins is more than happy to let the great and good share the stage with him at Cisco’s events – Apple CEO Tim Cook appeared at Cisco Live Las Vegas last year to discuss securing the mobile workforce. It is testament to the strength of partnerships at this level too from both sides; Apple and Google have plenty of the consumer clout, but Cisco’s presence in the enterprise market is vital too.

Yet it was also telling that Robbins mentioned Cisco’s Catalyst 9000 platform after Greene’s cameo. The Catalyst 9000 is, in the words of the CEO, ‘the fastest ramping product in the history of Cisco’. But first, an update on the company’s partnership with Google Cloud – in which the word Kubernetes was said rather a lot.

Robbins asked the audience of Cisco customers and partners how many were testing, piloting, or generally getting a feel for Kubernetes today. The applause which came back suggested a positive uptake. Google and Cisco’s partnership, launched in October last year, aims to give Cisco customers the same experience when running Kubernetes applications either on-premise or in Google Kubernetes Engine (GKE). Or in other words, to enable organisations to tackle their cloud journeys at their own pace.

“It’s helping all of you keep doing what you’re doing – keep innovating, and non-disruptively keep disrupting what your company’s doing,” said Greene. “You can’t just rewrite your applications and move to a new environment, and so what we’re doing here is bringing you Kubernetes containers, and then you can let your application developers concentrate on what they’re doing.” 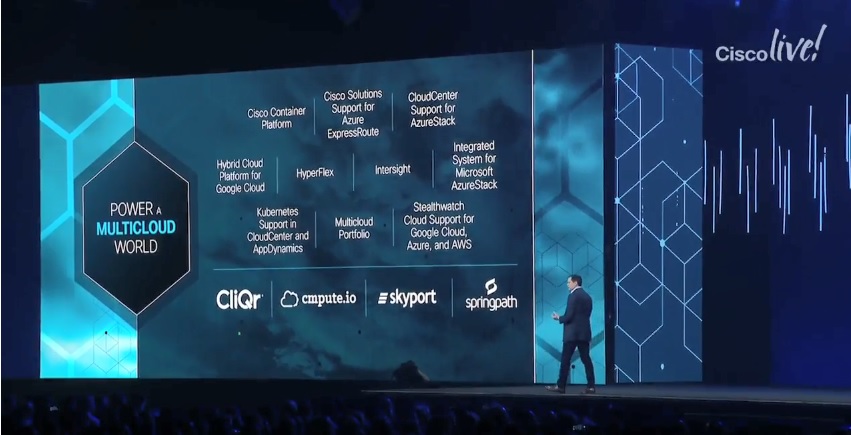 Greene said there were four stakeholder bases who would see benefit from the partnership; engineers, developers, ops, and security. “For engineers, being able to take this incremental approach, this non-disruptive way to keep disrupting what you’re capable of doing in a fast-moving company – that’s one huge advantage,” said Greene. “It really modernises the developer environment.

“I’ve been involved in software development for a long, long time, and I really think these modern technologies are almost giving a 10x productivity improvement,” added Greene. “The Kubernetes environment and Istio is just taking care of a lot of things that developers used to have to worry about. Now they can focus more on the business of the company.

“For the ops folks, it gives you a consistent environment that you can monitor,” Greene continued. “Istio’s going to be really powerful there. For security, to have one consistent model across everywhere that you’re running, that’s huge – and it’s really good for the developers because you don’t have these lowest common denominator rules that can get in the way of innovation.”

Perhaps talk of upstaging is a little harsh. Cisco’s vision is around how its network architecture (above) underpins the innovation and partnerships taking place. “The reality, I believe, is it’s this architecture that brings together automation, security, analytics,” said Robbins. “For me, that’s what’s made the big difference – because you all understand how this can change the operational paradigm in your organisations and allow you to focus on other strategic things.”

Robbins touched on the importance of emerging technologies and their effects on the business in his opening salvo. “This is going to define how we think about the network’s next act: what does it have to do?” asked Robbins. “When you think about the complexity of the world you’re operating in now – which candidly is more complex than it was even four years ago – and then you introduce these new tech changes that bring incredible capabilities.

“This is at the heart of how we defined our strategy that we first began to launch last year. If you step back and look at all of the connections, you have traffic going to public cloud, SaaS, applications, consuming M2M/IoT connectivity at the edge… the only common denominator is the network. Therefore the network has to become a secure platform that enables you to help your organisation achieve its strategies.”

As regular readers of this publication will be aware, Google’s cloud push has been a serious bet over the past couple of years, with validation of Greene’s work coming from the most recent Gartner Magic Quadrant for cloud IaaS. The analyst firm put Google in its leaders’ section for the first time in five years.

Cisco offered one other piece of news yesterday; the company is working with NetApp to deliver a new managed private cloud FlexPod product. FlexPod ‘combines Cisco USC integrated infrastructure with NetApp data services to help organisations accelerate application delivery and transition to a hybrid cloud with a trusted platform for innovation’, in the company’s words.