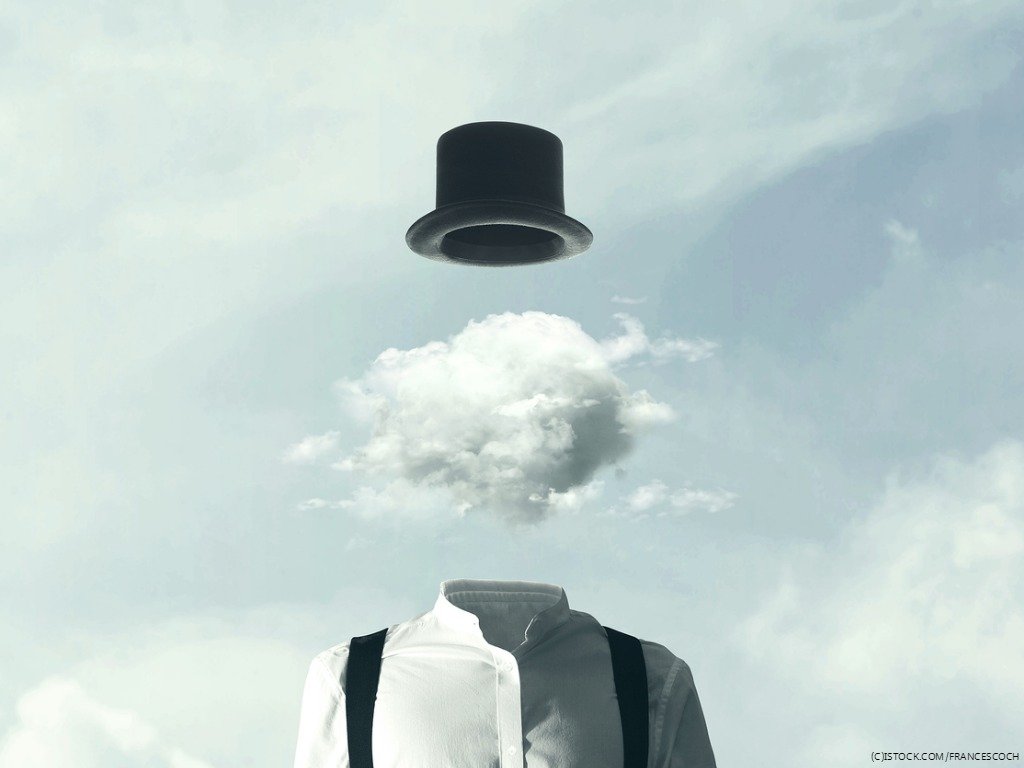 By James Bourne | 17th August 2018 | TechForge Media https://www.cloudcomputing-news.net/
Categories: Containers, Infrastructure, Research, Software as a Service,
James has a passion for how technologies influence business and has several Mobile World Congress events under his belt. James has interviewed a variety of leading figures in his career, from former Mafia boss Michael Franzese, to Steve Wozniak, and Jean Michel Jarre. James can be found tweeting at @James_T_Bourne.

Machine learning, cloud-native and containers are going to be key growth drivers of the future enterprise software stack – but it could be the end of the road for software as a service (SaaS).

That’s the verdict from an extensive new report by venture capital fund Work-Bench. The full 121-slide analysis (Scribd), titled ‘The Enterprise Almanac: 2018 Edition’, aims to dissect a ‘once in a decade tectonic shift of infrastructure’, focusing on the new wave of services that will power the cloud from the end of this decade onwards.

“Our primary aim is to help founders see the forest from the trees,” wrote Michael Yamnitsky, report author and VC at Work-Bench. “For Fortune 1000 executives and other players in the ecosystem, it will help cut through the noise and marketing hype to see what really matters. It’s wishful thinking, but we also hope new talent gets excited about enterprise.”

If this analysis is anything go by, there will be plenty to get excited about in the coming years.

Large technology companies are winning at AI, Work-Bench asserts. And why not? This publication has devoted plenty of column inches in recent months to how among the hyperscalers are using artificial intelligence and machine learning as a differentiator – indeed, Google Cloud this week launched pre-packaged AI services to try and stay one step ahead of the competition.

It’s not so much of a differentiator if everyone’s getting in on the act, though. And this is where others are struggling. “Despite hopeful promise, startups racing to democratise AI are finding themselves stuck between open source and a cloud place,” the report notes.

It’s a data-driven world, of course – but the disconnect between the ever-increasing amounts of data being crunched and the data scientists available to crunch it is clear. And this is where the Googles, Facebooks, Microsofts and Amazons of this world are again at an advantage – by hoovering up most of the AI talent. 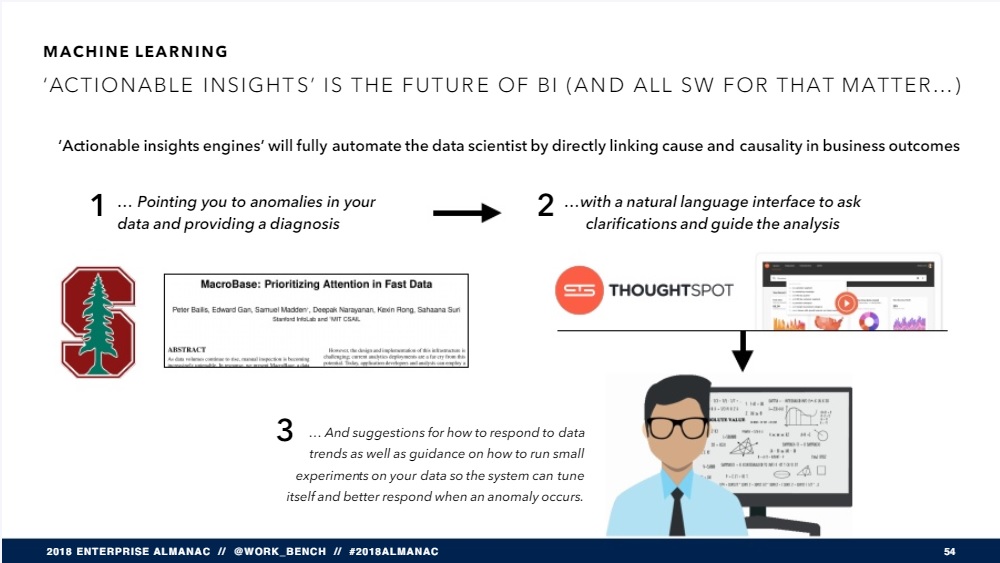 Those who are making strides outside of the behemoths, however, are startups focusing on automated machine learning (AutoML). The key, instead of beating Amazon and Google at their own games with SageMaker, TensorFlow et al, is to focus their products and messaging on BI analysts (above). Companies such as Tableau have got data visualisation nailed – but about getting reports in natural language, or ascribing even greater insights? To illustrate this perfectly, Tableau acquired Empirical Systems, an MIT-originated AI startup, in June for this very reason.

“Expect all modern BI vendors to release an AutoML product or buy a startup by [the] end of next year,” Work-Bench concludes.

Writing for this publication earlier this week, Jimmy Chang, VP products at Workspot, discussed the frustrations of terms such as ‘cloud-native’ and ‘cloud-enabled’ being interchangeable. Being in the virtual desktop business, Chang uses an example from his own industry: only two of the VDI players in the market have genuinely cloud-native products.

It’s important therefore to determine what’s what without the risk of cloud washing. For Work-Bench, it begets an exploration of cloud infrastructure and software from Amazon Web Services, Microsoft Azure and Google Cloud Platform – a subject which is always good to analyse at the end of each quarter, as regular CloudTech readers will testify.

The Work-Bench analysis certainly makes sense from here. AWS is entrenched as #1, Microsoft at #2 for now, and Google at #3, in spite of the latter two’s continued momentum. ‘Killer products… but where’s the enterprise love?’, the report asks of Google.

The majority of organisations continue to struggle with containerising applications and have three key strategies, the report notes. The first strategy is ‘monocloud’ – think Ryanair, GoDaddy – where companies go all-in on the provider of choice. The second is a price broker model with workloads run wherever they are cheapest – Kubernetes is seen as a key tool here for those who have gotten to grips with it – and the third is a function broker model with different clouds for different workloads. Remember the brouhaha when it was revealed long-time AWS house Netflix was running disaster recovery workloads on Google – an arrangement the company stressed had been going on for a while? It’s on its way – and makes good business sense when applicable.

The report also bows to the king of container orchestration in Kubernetes; despite struggles it has a clear market lead, with half of enterprises using containers in some capacity according to 451 Research. But Work-Bench asserts the puck is heading towards the service mesh, a configurable infrastructure layer for microservices applications offering load balancing, encryption, authentication and more. Security will be the killer use case going forward. “Service meshes are like broccoli… you know you need them but only adopt when you feel the pain of not having them,” the report says.

The decentralisation of SaaS

This is arguably the most interesting punt in the report: as software as a service (SaaS) ate infrastructure, infrastructure will go back and eat SaaS.

According to IDC’s most recent figures, software as a service spending globally was at $74.8bn, almost three times the size of infrastructure as a service ($24.9bn). By 2022, IDC predicts SaaS spending to be ahead of SaaS, IaaS and PaaS combined at $163bn. 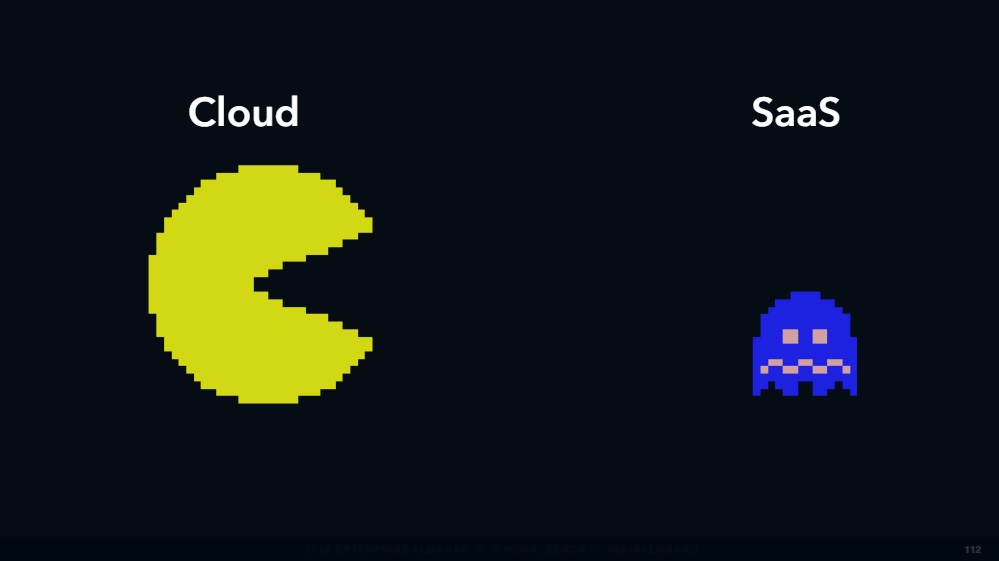 But the biggest players could get too big for their boots (above), as the report explains. “SaaS vendors are becoming mighty and taking advantage of it – using aggressive tactics to expand dollar share within existing accounts, often by shoving excessive features and extensive contract terms down customers’ throats,” the report notes. “Customers have no choice but to succumb to these closed-ecosystem tactics.”

The reasoning goes back several years and further: as SaaS provided good economic sense when running infrastructure was expensive and configuration was difficult, the pendulum with cloud computing has swung.

The report adds that there is one solution: containers. If enterprises are struggling with them today then they will need to act fast, as in the opinion of Work-Bench it doesn’t quite fit in with SaaS customisation. “In a world where services written in different languages can easily communicate, proprietary languages that require hiring ‘experts’ will be obsolete.”

The empire strikes back

The report focuses on the return of the big traditional enterprise software players as an introduction – but it can also be seen as an overarching sentiment of the industry today.

Tellingly, two of the largest software acquisitions over the past six years were closed in the last six months. This is not so much in terms of the amount of money spent – although $7.5bn and $6.5bn respectively were shelled out for GitHub and MuleSoft by Microsoft and Salesforce respectively – but by dividing enterprise value by trailing 12 month revenue.

As venture capitalist Tomasz Tonguz points out, comparing the Microsoft/GitHub deal (24.5 EV/TTV) and Salesforce/Microsoft (21.2) with, for instance, Microsoft’s acquisition of LinkedIn (6.8) and Cisco’s buy of Broadsoft (5.9) shows much greater value with this year’s buys.

“I expect substantially more acquisitions of the scale and at these multiples through 2018,” Tunguz wrote back in June when disclosing these figures. “The growing sizes of the software market. The desire for continuing growth. The pace of innovation within software. The increasing competition amongst incumbents. A vibrant public market that is continuing to price companies aggressively.

You can look at the full slides here.