Ready or not, the mobile cloud era awaits you

We’re nearing the end of 2014 and most smart CEOs already know their IT transformation game plan for 2015 – more digital differentiation woven into the fabric of their essential operations.

Every enterprise is now a digital business, regardless of the industry. That’s why digital service innovators are in such high demand. Meanwhile, many of the more traditional IT process-oriented jobs will diminish in importance.

Are you evolving your IT support team’s roles and responsibilities, as a result these key trends? Forward-thinking CIOs and IT managers have already embraced business technology that will do some of the more tedious routine system administration tasks via automation, so that they can redirect their focus to higher-priority activities.

What’s considered a pressing requirement? Many believe that it’s attaining parity in the enterprise with the freemium consumer cloud offerings that have helped to fuel the so-called Shadow IT phenomenon.

However, there’s been progress that’s worth revisiting. According to the latest worldwide market study by International Data Corporation (IDC), public cloud computing services spending for the enterprise will reach $56.6 billion in 2014 and grow to more than $127 billion in 2018.

This forecast represents a five-year compound annual growth rate (CAGR) of 22.8 percent, which is estimated to be about six times the rate of growth for the overall global IT market. In 2018, based upon findings from the IDC study, public IT cloud services will account for more than half of worldwide software, server, and storage spending growth.

"Over the next four to five years, IDC expects the community of developers to triple and to create a ten-fold increase in the number of new cloud-based solutions," said Frank Gens, senior vice president and chief analyst at IDC.

The ongoing adoption of what IDC calls cloud-first business strategies - by IT buyers implementing new digital services - is a major factor that is driving public enterprise cloud services growth. 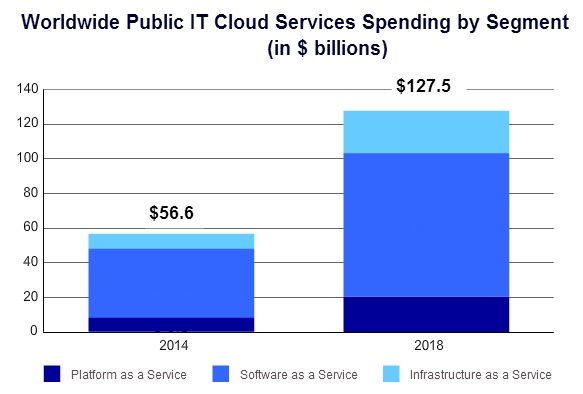 IDC believes that the enterprise cloud services market is now entering an evolutionary phase. It will produce an explosion of new digital solutions and associated commercial value creation – built on top of the pervasive cloud computing infrastructure that’s being deployed across the globe.

These new applications and emerging use-cases will be created in vertically-focused platforms with their own innovation communities, which will help to reshape how companies operate their increasingly essential IT function. According to the IDC assessment, it will also transform how these companies compete within their primary industry.

Mr. Gens adds "Many of these solutions will become more strategic than traditional IT has ever been."

Next steps toward a digital nirvana

In time, I anticipate that we’ll see more multinational companies upgrade their legacy data centers and deploy private cloud solutions to meet their user’s needs – for a variety of different but equally compelling strategic business reasons. I expect public cloud to more frequently coexist with private cloud, in a multitude of combinations that will be limited by our own imagination.

Granted, there will be some technical constraints that need to be overcome – like making these cloud service permutations all work together in a frictionless manner. That being said, are you prepared with the right hybrid cloud management and orchestration solution in place? If not, start the due diligence process to select an appropriate solution. You’ll need time; choose wisely.

Of course, the now ubiquitous open-source software suites will play an instrumental role in enabling the transition to a hybrid cloud model. Certainly, the enthusiasm and momentum of the early-adopters at the OpenStack Summit in Paris, France this week was very encouraging for the fast-followers.

Besides preparing for a multi-cloud environment, I believe that the future outlook for many companies will likely include embracing a Mobile Cloud scenario, where the two most apparent enterprise technology trends morph together into a cohesive whole.

The combination of capable mobile devices and hybrid cloud computing services should provide an adaptive and flexible business technology foundation, so you’ll need to understand how they integrate into your existing IT infrastructure and legacy commercial applications.

Smartphones, tablets and personal productivity-oriented mobile applications (apps) are transforming how information is being accessed, used and shared in the enterprise. The savvy Line of Business leaders at progressive companies have already enabled employees to purchase mobile cloud apps for file syncing, and other requirements that may not have been met by the IT organization.

Some perceptive corporate IT leaders saw the mobile-first strategy gain traction in the marketplace, and immediately got involved with a proactive plan to build and support corporate-approved apps. The mobile application development platform providers, such as FeedHenry, offer the tools and services that together constitute the critical elements of a total solution.

These platforms enable an enterprise to design, develop, deploy, distribute and manage a portfolio of mobile apps running on a range of devices and addressing the requirements of diverse use-cases. Clearly, the best way for IT organizations to be relevant in the mobile cloud era is to get involved; preferably sooner, rather than later. So, what’s the status of your plan?