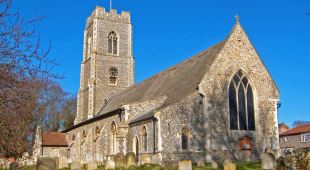 By James Bourne | 13th September 2013 | TechForge Media http://www.cloudcomputing-news.net/
Categories: Industries, Research,
James has a passion for how technologies influence business and several Mobile World Congress events under his belt. James has interviewed a variety of leading figures in his career, from former Mafia boss Michael Franzese, to Steve Wozniak, and Jean Michel Jarre. James can be found tweeting at @James_T_Bourne.

In the week that Pope Francis decreed that atheists could still go to heaven if they followed their consciences, a new report from Intacct has come to light showing how churches are taking up the cloud.

Four out of five large churches – comprising 1000 weekly attendees or more – are using cloud technology, with 55% of small churches currently in the cloud.

And the advantages are clear to see. Churches who are using the cloud to support online giving were almost two times more likely to see an upturn in donations. 72% of cloud-based large churches affirmed this, as opposed to just 41% of smaller churches.

Not surprisingly, the report also revealed a spike in engagement for churches in the cloud. Just over half (53%) of large cloudy churches stream their events, compared to just over 32% of those not utilising cloud.

The biggest growth however is in smartphone apps for engagement. Just under half (49%) of large cloud churches utilise apps during their services, with less than a quarter of all other demographics being app friendly.

The survey also looked into the technologies churches were using on a regular basis. Not surprisingly, nearly every large church had a website, with four in five having a social media presence as well as utilising recording software to stream and podcast their services.

For churches with fewer than 1000 in the regular congregation, the numbers went down incrementally; three in five podcast and stream their sermons, whilst just over 80% have a website. In terms of social media, over half (51%) of larger churches and nearly three quarters (74%) of smaller churches said they didn’t have a set policy in place.

What may also be a surprise is that 70% of churches provide Wi-Fi to their members. 50% of all participants said their Wi-Fi was password protected whilst 20% said it was open to all.

The overall conclusion of this report, therefore, is that whilst you don’t need the cloud to be tech-savvy, it certainly seems to be an enabler for the religious sector.

And for those whose last visit to church was longer back than they wish to remember, it may be a chance to blow away the cobwebs and be surprised at the technological facilities on offer.

Yet Clark Newby, VP marketing at Intacct, believes there is still a lot of work to do. “Churches need more comprehensive, automated reporting to tie programs to results such as membership increases, so they can use funds to the greatest benefit of congregants,” he said.

The presence of cloud in industry is a hot topic, especially given areas considered to be slow in terms of technology adoption – healthcare, banking and, of course, religion – are getting to grips with the cloud.

Last month, exponential-e released a report examining how closely cloud integrated the charity sector is, with mixed results: 42% of respondents said they had used software as a service (SaaS) in the past 12 months, whilst 39% said they hadn’t considered a cloud solution at all.

The other side of the coin, however, is to look from the cloud service provider (CSP) perspective; are these relatively glacial growth areas a missed opportunity for these players?

The full results can be found here. Should this be seen as a wake-up call to CSPs who may have overlooked the religious sector?