As 2011 comes to a close, many busy executives and IT managers will be pondering the continued adoption of cloud applications within their organizations. How can a business be adequately prepared for the anticipated increase in demand for managed cloud services?

Moreover, what are the key related market indicators that are shaping the future of emerging business technology deployments?

The Cisco Global Cloud Index is an ongoing effort to forecast the growth of global data center and cloud-based IP traffic. The forecast includes trends associated with data center virtualization and cloud computing.

By 2015, one-third of data center traffic will be cloud traffic.

This represents a 33 percent CAGR. The higher volume of data center traffic is due to the inclusion of traffic inside the data center (Typically, definitions of Internet and WAN stop at the boundary of the data center). 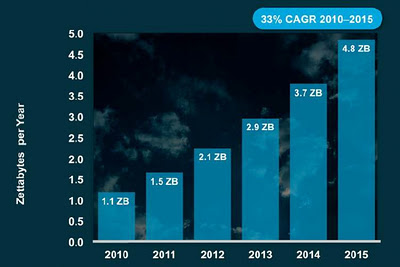 Traffic Destinations: Most Traffic Stays Within the Data Center

The ratio of traffic exiting the data center to traffic remaining within the data center might be expected to increase over time, because video files are bandwidth-heavy and do not require database or processing traffic commensurate with their file size.

How does the transition of workloads from traditional data centers to cloud data centers effect the typical IT environment? Find the answer to this question, and learn more about the implications, by browsing the Cisco Global Cloud Index forecast data.